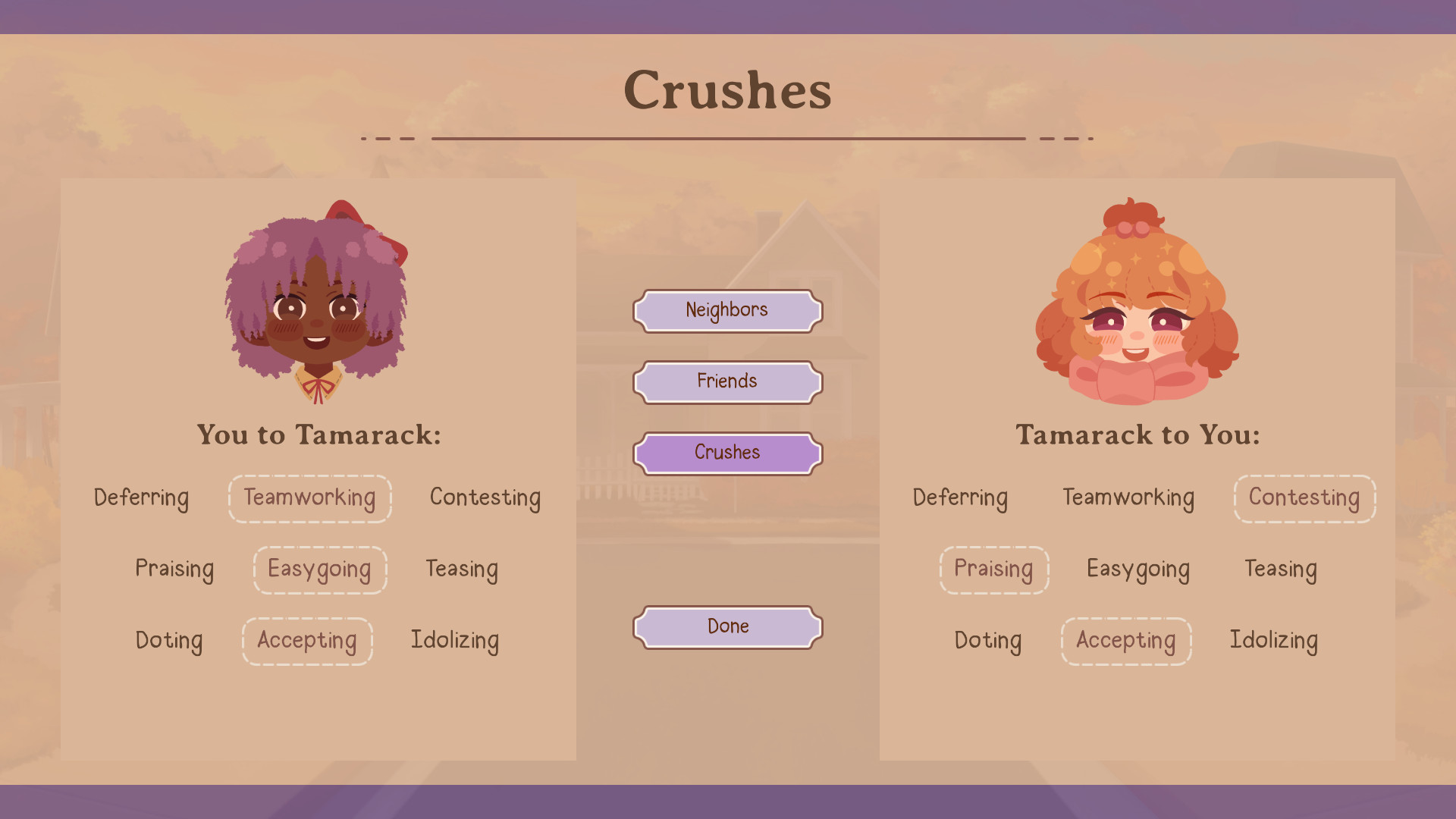 So, things are different in this game than they were in Our Life: Beginnings & Always when it comes to creating a relationship with the leading characters. And all of this here in such a long post is why we’re not really committing to having extra side character stories for OL2. There’s a lot do with just the two we’ve got, ahah.

It can be overwhelming when laid out like this in text but don’t worry, it’s very straightforward to use in the game itself. You only have to click a few options that feel like they fit your MC and then it’s set up. Now, here’s the actual breakdown of the feature-

The Interest/Comfort system from the first OL is gone. The Warm/Moderate/Cold-Sporty/Mixed/Studious system Cove used has been replaced as well. We, hopefully, made the elements less confusing by putting it all together in one combo feature instead of fully separate ones.

Relationship Standing and Expression Elements work together to make your unique Dynamic in each Step. However, they don’t replace being able to choose what you say/do in the events themselves. This is more of an overall type of deal and you still control the specifics from scene to scene. You can have a contesting dynamic but make choices that have your MC be shy/independent instead of bold/sociable about their decision making, and such.

And there’s still the extra layers in future Steps where your past relationship with the person has ripples within your current relationship. Being at Crushes in Step 3 will be somewhat different if you used to friends than if you were crushing from the start, and so on.

The Initiative Level feature from OL1 is also in this game too, I’m just not gonna include a description of it here because it isn’t changing much and this is too big already. You’ll also be able to like or dislike side characters you meet, but that’s a much simpler system done through normal choices.

And okay, finally, that’s the very long to explain, but ideally not too confusing to make sense of, Relationship Dynamic System! I think it’s gonna be super nifty and way more flexible than our first attempt at making this kind of feature. Hopefully you’ll all enjoy it too!

Get Our Life: Now & Forever

A paper airplane, two new neighbors, four autumns, and a one of a kind life.

I'm guessing like Cove's "personality" but since I've never figured out how it works, it'd be nice to know what determines it. Love you guys' relationship systems!

i really hope the devs make a poly option because honestly that would be so so awesome :^((  i really wish they do lol<3

I would be so happy if you were to make a poly relationship possible in OL 2 ;v; As a poly person, and seeing how precious these two are, I'd love the option personally!!

might be too much to implement, but I wouldn't know lol

This is so exciting! I love seeing the differences between this game and the previous OL. I'm sure you've already seen people asking for the poly route, but I'll add on. Obviously, the game is going to be great with or without it but I haven't found any visual novels with that feature so it would be really really cool to see!! That aside I'm super super excited for this game, I'm really really excited to get to meet the characters and can't wait to fall in love with this like I did for Our Life: Beginnings & Always

OH MY GOD, IT'S SO COOL, I LIKE THIS SYSTEM MUCH BETTER!!!!! it's very interesting to see changes like this!!!

you're so wonderful in making cozy novels, I'm so hyped to wait until release!!!! I'm sure it's going to be amazing experience, i liked your previous OL game A LOT, and will wait for this game no matter how long it needs, even if it's going to come out now or forever (hehe)

Omgg this looks amazing, I'm so excited to playyy !!

Ooo!! This is so exciting oh my god. You guys are working so hard for this game and I just can’t wait to able to play it! It’s gonna be so awesome to see what else you come up with. This feature is already amazing

so excited for this!

I love this!!! Unique and changeable relationship dynamics are my favourite things I swear. I also would LOVE a poly option but I understand if it is too complicated! Keep up the amazing work and take care of yourselves!

Very interesting system! I expect it to be very enjoable and exciting!

I can't emphasize enough how much I admire this team's ideas and commitments to portrayal of personality and especially interpersonal relationships. It's not at all a simple thing to code these kinds of variations and I think that's why this is the first time I'm seeing it done in such interesting, dynamic ways (at least in an English-language interactive fiction/visual novel format). My biggest interests in life are human psychology, dynamics, and relationships and this is the only life/dating sim I've played where I could tell the writers cared about that stuff as much as I do 😆 I've started writing a game myself since I first started backing OL1 like... oh gosh, 2 years ago? when was it 😅 But yeah, I say that because this dev team's clear passion and innovation with coding human interaction has inspired a lot of the decisions I am making with my own game today.

You guys rock, I can't wait for OL2! and I really can't wait to try out the new relationship system!!

I was always wondering why there weren't parts in OL1 wherein Cove would be jealous even though I half expected him to be if even a little given his character. Now I know why. Not saying it was greatly missed though just taking note. I do understand the choice on why to avoid it since I'm not very big on seeing that myself but I do think that including that option lends itself to a more realistic or human-like experience with the character. That being said, this new relationship system is looking to be really cool! There's even more features and it all sounds very promising. I'm looking forward to it.  Thank you as well for the well-written explanation and all your hard work.

(Also took note of the default expression settings for our two love interests and that just got me so excited to meet them. I can already imagine what they'll be like😭💖)

Omg yeeees I can't wait to be able to play this!!!

And as a polyamorous person, I would LOVE if you added a polyam feature! We don't really have many games that let us do that ^-^'

I find very few things comforting and OL1 and Floret Bond landed in the list very swiftly! I loved the first game SO much and I know I'll love this game even more!

Thank you for your work, seriously! ❤️

I am a huge fan of Our Life: Beginnings & Always. It makes me feel emotions I have not experienced in my real life relationships. And now this! I just want to tell you how entertaining your games are and how they bring even just a bit of hope into one's life, if not a handful. You (or are you a team?) are great content creators and I wish you the best. More success and games like these please🤗

This sounds really interesting! I can't wait to see how it all works in game! Also, i love the cute chibi head sprites, ahaha. I'm low-key excited to make my own in the demo (assuming the character creator is complete in the demo;;; )

Also, I just love how cozy the UI feels, ahhhh. It makes me feel nostalgic for some reason, ahaha.

Edit: also also, I concur with the other people who want the polyamorous route, but it's perfectly fine if it doesn't happen as well. I know how much work this whole game is and I'll be happy either way!

The new system sounds like it'll be great! I was a big fan of the system in OL1 because it's so unique compared to other visual novels, so it's awesome you guys could innovate it for the sequel. ^^

so excited for this :)) the game looks great!!